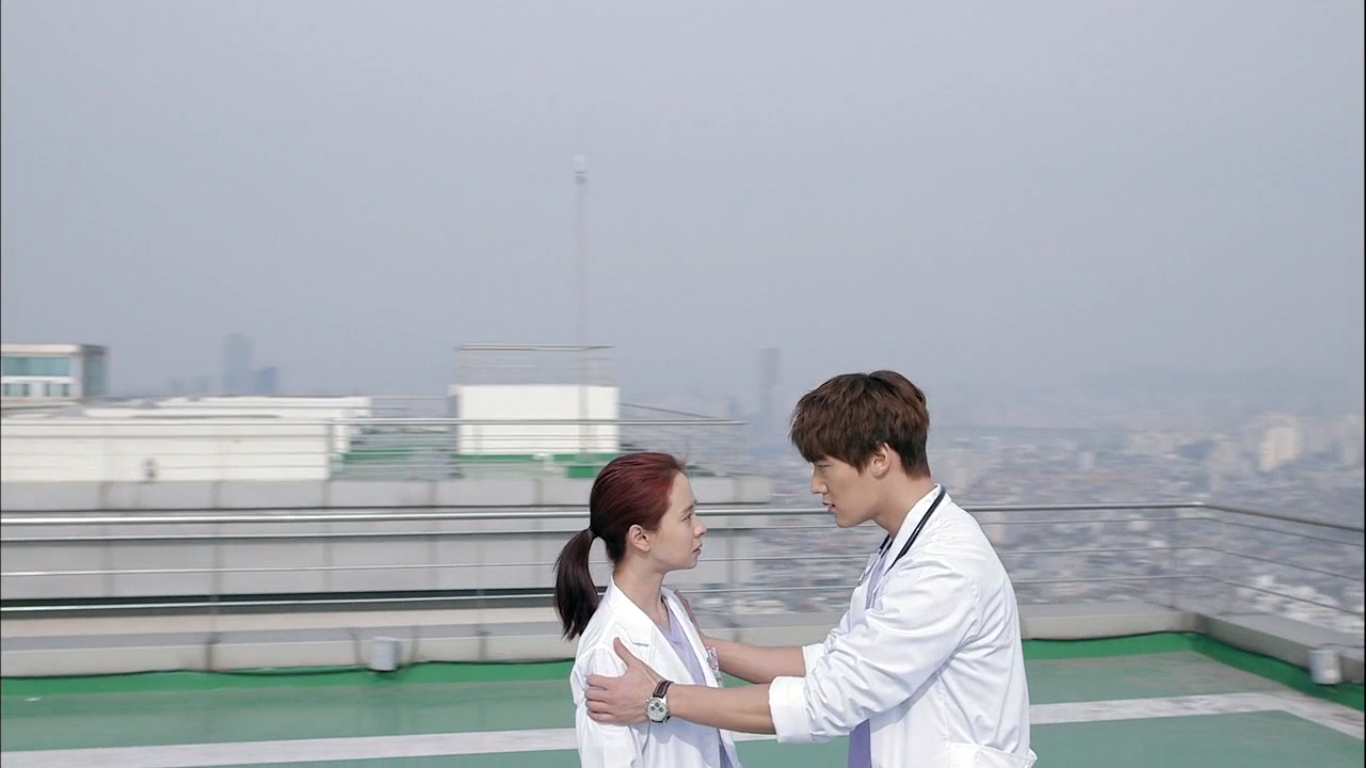 If the reason for last's week's single episode was to improve the quality of Emergency Couple, I think it worked! I laughed more in the two episodes this week than I did in all seven of the episodes that came before. That being said, there's a lot to talk about this week so let's get to it!

First up, it's plainly obvious that Chang Min is suffering from a massive overdose of feelings when it comes to all things related, even remotely, to Jin Hee. While I love to watch the green-eyed monster of jealousy wreak havoc with Chang Min, I'm a little confused as to why he's feeling as strongly for Jin Hee as he is. What has prompted this surge of emotions that's gotten Chang Min so riled up he's asking Yong Gyu to explain the gnarled tangle of emotions that seems to be tearing his insides apart? Wasn't it just a few episodes ago that Chang Min was attempting to have Jin Hee kicked to the curb? So why the sudden change of heart? What has happened in the past nine episodes that is so traumatic that it can over-ride the past six years of hatred? Could it be that Chang Min never really hated Jin Hee in the first place? If that's so, why did they have to endure such a nasty break-up in the first place? If love was still there, shouldn't they have been able to work things out? It hardly seems fair to begrudge Jin Hee's growing emotions for Dr. Gook when Chang Min was the one willing to let Jin Hee go in the first place.

And speaking of Jin Hee... At this point, I really can't see her falling in love with Chang Min all over again. I know it's going to happen eventually (next week's previews pretty much proved that) but for the moment, I can't see why she would. Chang Min hasn't really done much to sway Jin Hee's feelings for him. Yes, he was the one who saved her from being fired but we can obviously see that she's feeling more burdened by this knowledge than grateful and she has every right to feel that way. Chang Min has done nothing to prove his feelings for Jin Hee are in any way tender or loving (and yes, I realize that's because he hasn't actually figured that out for himself yet) but to expect Jin Hee to be grateful, at this point, would be absurd. I can totally see how she could misinterpret Chang Min's actions as being purely selfish; as if he just wanted to have this to hold over her head and make her feel that she couldn't have made her dream of becoming a doctor, a reality without him. At this point in their relationship, Jin Hee would really expect nothing else from Chang Min. The very idea of him doing something for her out of the goodness of his heart seems impossible because let's face it, there's been nothing Chang Min has done for Jin Hee (at least to her face) to convince her that he's anything but the awful jerk she divorced six years ago.

Still, I am incredibly curious to see how Jin Hee's feelings toward Chang Min are going to change. I think I caught just a glimpse of it as she was watching Chang Min treat Baby Gook. I think the concern mixed with guilt, that was plastered all over Chang Min's face as he watched the suffering of Baby Gook, was genuine enough to pierce through the massive wall Jin Hee has built around her heart to keep Chang Min out. I'm pretty sure that moment, regardless of how small and insignificant it may have seemed, is what is going to start swaying Jin Hee's feelings toward Chang Min. I just hope there will be more moments of genuine sincerity between the two because, honestly, I think that's what they need the most to heal the breech between them.

That being said, there's been quite a lot of positive development in the Jin Hee/Dr. Gook relationship this week. They were such an adorable couple, walking back to the hospital after saving Emma and enjoying a meal together. It's no wonder Chang Min was jealous, Jin Hee was smiling and laughing and seemed at perfect peace... It was a sight Chang Min hasn't seen in years and I've no doubt, it hit a nerve because once upon a time, he had been the one that made Jin Hee happy. Unfortunately for Jin Hee, Chang Min isn't the only one jealous of the budding relationship between her and Dr. Gook. It seems Dr. Shim has quite a ferocious green-eyed monster hiding inside her as well and (as I was rightly afraid of) she isn't afraid to unleash it on Jin Hee whenever she's most annoyed.

I find it funny that Dr. Shim, who always comes off as such a cool and easy-going person, is actually the ferociously jealous type. No matter how hard she tries to keep her feelings buried, it seems Jin Hee has a way of bringing them to the surface. What I really love about Dr. Shim though, is how there is so much more to her than meets the eye. This woman has some secrets, and I have a feeling they're some pretty major ones. This week, I believe now, more than ever, that Dr. Shim and Dr. Gook were once a couple. Were they married? I still haven't decided (though my first thought is to say that yes, at one point they were) but I'm convinced they were in a relationship serious enough to suspect Dr. Shim is actually the mother of a baby Dr. Gook is clueless he ever fathered. I'm also fairly convinced that this child has some serious health problems, which is what that mysterious phone call to Dr. Shim was all about. If all this is true, this is going to cause some serious fireworks between Dr.s Gook and Shim, at some point and it will either drive them completely apart or bring them together forever. Which ever way this goes, it's going to be tough on everybody... I'm just excited to see how this, and by "this" I mean this entire storyline, is all going to play out as things are finally becoming very interesting!

Now that I've shared some of my thoughts, I'd love to hear yours... How do you see Chang Min and Jin Hee reconciling? What is going to make Jin Hee see Chang Min in a more favorable light? Do you think the relationship between Jin Hee and Dr. Gook will progress much beyond what it is now? Why do you think Chang Min is so troubled when it comes to Jin Hee? What has made him change his mind (and his feelings) about (for) Jin Hee? I'd love to know your thought, ideas and predictions so be sure to share them in the comments below!

Be sure to check out our blogs for more Hallyu fun!
Zombie Mamma | Hallyu Know? | Wehaiyo!
Or tweet at us @Hallyu_Tanya @dapowerz @TheZombieMamma
Miss something? You can catch up on all of our past discussions of Emergency Couple here: