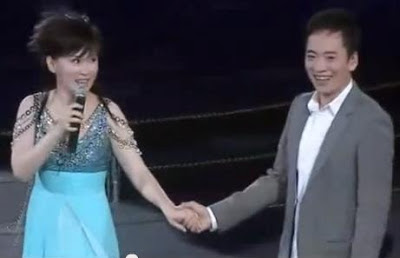 Hong Kong actress and singer, Amy Chan, starred in numerous television dramas and even participated in the soundtracks for her TV series. Known for her television roles as a pure, feminine, caring, and sacrificial female, Amy also has a semi-hidden singing talent and typically releases her soundtrack songs in her albums. I actually bought her memorable 1995 album, 女人背後 Behind All Women, in cassette form back in the 90s. Because of my passion for Amy Chan, I decided to translate one of her songs. In this case, I choose a sweet duet called, “Fate Determined This Life” sung by 陳秀雯 Amy Chan and 麥子杰 Eric Mak. Those who have seen one of Amy Chan’s famous 1996 ATV channel series titled, 《再見艶陽天》 or “The Good Old Days” might remember this song as it was an “interlude” song for the TV series.

I don’t know much about Eric Mak and it was difficult to find a lot of info on him, but from what I see from one of Amy Chan’s concerts, they act like they are very good friends. I love Eric’s voice as well and I wish I knew more about him.

The song, 緣定今生, is such an uplifting song with a beautiful and relaxing melody. I can easily listen to this song over and over again. My favorite lyrics are:

As soon as Amy starts off the song, my heart swells up in emotions. Combining her sweet voice with the image of broken flower petals swirling in the air gives me a powerful, sweet, and sad emotion. The lyric really sets the mood for the song.

My other favorite part is:

This lyric is really drilled in my head. Everything is determined by fate including your soul mate. The words are such a romantic idea that I can imagine what an exciting life to have your romantic fate destined. I start imagining the love story formula for almost every single TVB drama. Man and woman meet. Man and woman fight. Man and woman learn to appreciate each other. Man and woman fall in love. It’s a hate/love relationship, but destiny will always tie them together.

There aren’t many indications that this song is sad except for the first lyric, which describes petals flying in the wind. I guess the lyricist wanted to go back to the original mood where even though a scene is sad, it is also sad in such a beautiful way. The lyricist didn’t have to say “pitifully beautiful” and that last line really makes me think about the possibilities that love is great, yet sad at the same time. For an extra dose of sadness, the second half of the chorus is repeated again with minimal music to reinforce the mood.

With all this in mind, enjoy the song!

Sorry for the long intro in the video. The song starts at 2:09.

女:碎花紛飛 (F: Broken Flowers swirl in the air)
如行隨影ㄧ切也為你 ([how it] moves, following traces, all [of it is] also for you)
盡訴心意再這地 (completely telling the heart’s thoughts [at] this place again)

幸運是我這豔陽來的細膩 (Lucky is I, [that] this beautiful, sun came exquisitely)
願快樂快些趕走痛悲 (Wish happiness [would] hurry up more [in order to] drive out pains and sorrows)

男: 碎花紛飛 (M: Broken Flowers swirl in the air)
柔情如妳ㄧ切也是美 (Tender feelings like you-  all [of it is] also beautiful)
共你分享是趣味 (Sharing [it] together [with] you is interesting)

就讓俗世裡妳是唯ㄧ知己 (Let [us] assume within [the] secular world [that] you are [the] only intimate friend)
讓美麗記起心祇得你 (Allowing beautiful recollections, [in my] heart, [there’s] only you)

合:緣訂今生(T: Fate determined this life)
真心不會分離 ([A] true heart will not separate)
命運給我  (Destiny for me)
好比ㄧ齣好戲 ([Is] very much compared [to a] good film)
緣份是我與你 (Fate is you and me)
同渡每日每天千億世紀 (Together passing through every day, every day, [a] thousand, [a] one-hundred million centuries)
啊……(Ahhh…)


Originally sung by the ever-popular HK singer, Leo Ku, “This Enjoyable Night” is one of Leo’s most popular songs. The song title should not be confused with a popular Hong Kong variety show with the same name. The title of this song is commonly known as “Enjoy Yourself Tonight,” but honestly, I like my translation better. Having the word, “yourself” seems as though only one person is enjoying the night instead of two people enjoying the night together. If you are doing a Google search, it's best to use the "standard" translation of the song title instead of my title translation.

“This Enjoyable Night” was released in 1997 and quickly racked up numerous awards. In the year of 1997, the song won “The Top 10 Songs” at the Jade Solid Gold Songs Award Ceremony and The RTHK Top 10 God Songs Award Ceremony. In addition, at the Ultimate Song Chart Awards Presentation, the song helped Leo beat three out of the four Heavenly Kings: Jacky Cheung, Andy Lau, and Aaron Kwok for the “Ultimate Music Circles Male Singer Silver Award”.

In 1998, the song won “Most Outstanding Original Film Song” at the Hong Kong Film Awards since the song was featured as the theme song to the 1997 movie, “Cause We Are So Young” (求戀期), which also starred Leo Ku. In the film, Leo had a crush on Kathy Chow (周海媚)’s character.

Leo Ku’s actual music album has the same title as the featured song. The “Enjoy Yourself Tonight” album sold 50,000 copies.

Celebrities such as G.E.M. and Sammi Cheng have covered this song and sang the song as a duet with Leo. My absolute favorite collaboration involves Raymond Lam and Leo Ku. Raymond sang his parts so beautifully. In doing so, Raymond gave the song a whole new fragile feeling. Leo’s style is poignant while Raymond’s style is fragile.

One of my favorite singers, Cass Phang, also covered the song, but I didn’t like the musical arrangement and style of her version too much.

My favorite parts of this song are the beginning lines and the actual chorus:

從夢裡伊甸 (From within the Eden dream)
來到我枕邊 ([That] came, arrived [at] my pillow side)
夢與真之間 (Between dream and truth--)
就只差一吋 (Just only falls short of an inch)

The lines are so dreamy with everybody including the subject believing the situation is semi-real.

In the chorus part, I especially loved when Leo sang:
歡樂今宵 (This enjoyable night)

The term, 歡樂今宵, is supposed to be a  happy, joyous term, but Leo gave it new meaning by singing it so nostalgically sad. Two people presumably had a wonderful time, probably only to have fun with each other, but their feelings toward each other became real over the course of one night, though they do not allow themselves to pursue this feeling, perhaps due to possible rejection, which sounds painful.

Now, below are the full lyrics. I tried to translate it as directly (in blue font) as I could without ruining the natural English flow of words.

從夢裡伊甸 (From within the Eden dream)
來到我枕邊 ([That] came, arrived [at] my pillow side)
夢與真之間 (Between dream and truth--)
就只差一吋 (Just only falls short of an inch)

猶如無人敢碰 (As if-- no person dares to collide)
秘密現在被揭曉 ([What is] presently announced [is the] secret )
明日想起 ([When] tomorrow [comes], [I will] recall [that])
我們其實承受不了(We [are] actually unable to bear)

談情一世 ([By] speaking [of] emotions for a lifetime)
發現願望極渺小 ([I] discover wish[es] [are] extremely insignificant)
留下一點 (Leaving behind a bit)
距離回味猶自心跳 ([of] distance, [the] aftertaste still pulses)

歡樂今宵 (This enjoyable night)
虛無飄渺 (False, not faintly discernible)
那樣動搖不如罷了([with] that kind [of] wavering, it would be better, ceased)


歡樂今宵 (This enjoyable night)
虛無飄渺 (False, not faintly discernible)
那樣動搖不如罷了([with] that kind [of] wavering, it would be better, ceased)