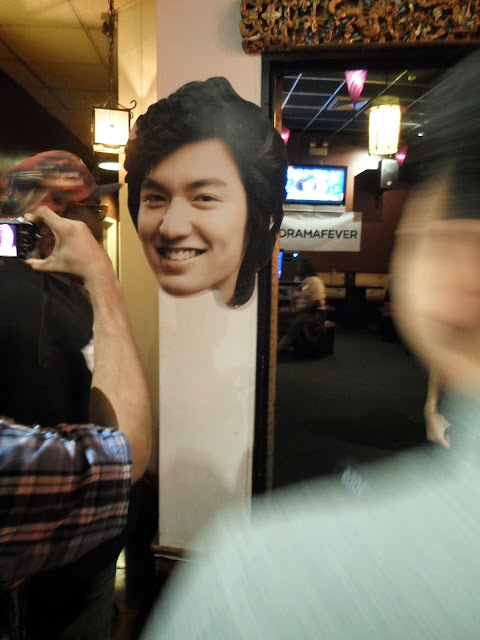 Hello, I’m back to face the aftereffects from the aftermath of the first Dramafever meetup in New York City on September 18th, 2013. Overall, it was a successful party, but I imagined something bigger and better, almost like a Yelp party. If you have ever gone to a Yelp party, most of their parties are awesome and perhaps, over the top. Why I am comparing parties when I should be super happy that I am able to attend a Dramafever event? I think I’m a spoiled Elite Yelper since I also write Yelp reviews on the side. At the Dramafever party, I had a lot of fun discussing dramas with others.

Sadly, I did not meet any Wehaiyo! readers, but I know it’s because I’m not well known in the blogosphere. There are so many awesome blogs out there and I don’t think I can ever match up to them, with ten blogs under my belt so my blog strategy will always be different from the popular blogs. Experts say that I should only start one blog at a time, but for me, it’s now or never. 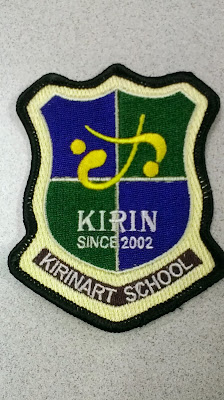 Speaking of now or never, I want everybody who is reading this to visualize their dream or goal and actually take a step to pursue it. Now, I hope your goal or dream is something positive and if it’s negative or disturbing, do not pursue it. I’ve met way too many people who tell me what they want to do with their life and when I tell that person the opportunity is there and I give him or her a name, a connection to somebody, for some reason, that person hesitates, tells me that he or she will take action, and ends up missing the opportunity. That, to me, happens way too often and I hope that does not happen to you no matter how impossible your dream may be. In my experience, after you take the first step, the next step gets easier and less scary because you already put yourself out there. Who doesn’t encounter obstacles in their path to greatness? Even I doubt myself many times about writing blogs, wondering if it’s worth it and if anyone ever reads it, but in the end, my inner resolve wins to continue on to my path to greatness, even if I don’t post as often as I should. I prefer quality posts over a quantity of posts.

I basically went off-topic, but I felt strongly about the dreams topic and when I met a Dramafever fan who had a dream, but didn’t pursue it, I was disappointed. 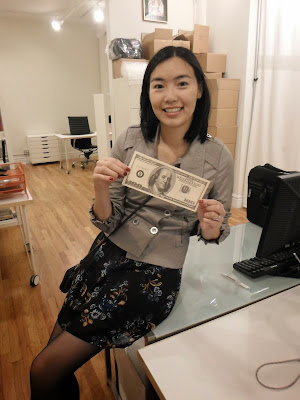 Before the party, when I told someone that I was going to a party as a VIP guest, that person asked if I became VIP guest because of my husband, who runs an art/fashion/music magazine and platform. Uh, no~ I too, can accomplish great things in my life on my own. Woman power! Moreover, married woman power! 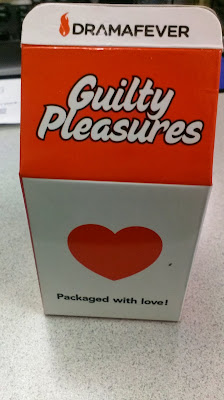 Basically, I went to the party at 7:00PM, an hour late. Well, even after I left work early, it was difficult for me to drive home, take the bus, take the subway, and transfer to another subway towards downtown Manhattan by 6:00PM. I guess VIPs have to come fashionably late anyway. I would have dressed normally to the party, but since Aileen at Dramafever was pumping me up, telling me I was going to be a VIP guest and how glorious it is, I thought I should dress and look better.

I am shocked at how little advance notice Dramafever gave everyone about the party. I actually ordered business cards for Wehaiyo!, but I didn’t get to use them since they didn’t arrive in time for the party. I was upset and even more upset when another Dramafever fan came to the event promoting a CD release party for a Japanese singer that is happening tonight. I did zero promotion for my blog. That’s my fault though.

I’m not sure if they introduced the Dramafever staff at the beginning of the party, but I didn’t know who’s who and nobody knew who I was either. When I arrived at the Apple Restaurant, the party was packed. I gave the Dramafever staff member my name and she checked me off the list. We all had the option of putting on nametags and I wrote my name and Dramafever username “Powerz” in my signature fashion underneath, but nobody recognized me nor asked me about my fancy username. Not that I’m asking to be famous, but I wanted to know if anybody recognized me from reading my reviews or had any opinions about it.
From the outside, I thought the party was huge, but in the end, I found out the hard way when I tried to sit down at one of the empty tables. A Dramafever staff member rushed over to stop me and told me that they only reserved 1/3 of the restaurant behind a chain rope, which suddenly appeared in my line of sight. Suddenly, the party felt packed and I had nowhere to sit. 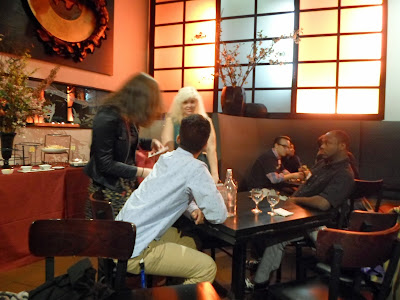 Overall, I would guess that 75 people made it to the meetup, but it was difficult to walk around in our 1/3 area of the restaurant. I must have gotten the tail-end of the food, because the only thing left was bits of salad, tortilla chips, and quesadillas. Drinks, as I learned from another Dramafever member, are not included. 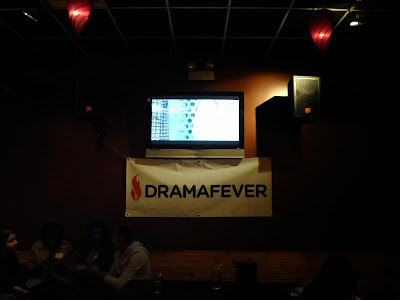 The film-viewing room was a small room that could probably fit around 30 people. They played an episode of various dramas like Mischievous Kiss: Love in Tokyo, Love Around, and others on a medium-sized TV, but I’m sure that nobody was paying attention to the TV. People were too busy chatting and the Dramafever staff often made announcements in there. I wanted to go inside, but it was packed with people. I imagined that a film screening room should have enough seats for everyone and should be a quiet place so people can enjoy the program. 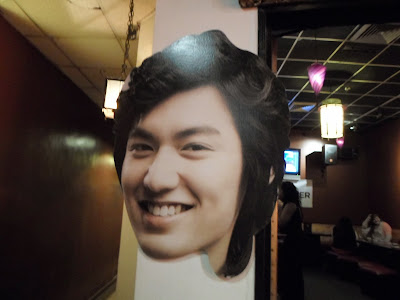 Outside the viewing room was a giant cardboard head of Korean actor, Lee Min Ho. It’s almost scary how big they blew up the image of his head. I took a picture with his head too. 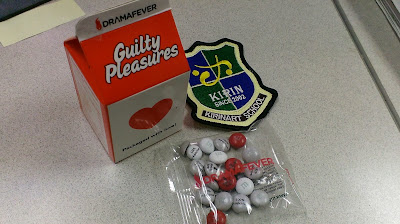 There was an Heirs sign-up alerts table. If I signed up for Heirs, I can get a mini Dramafever gift: a Dramafever, Lee Min Ho, small milk carton. Inside, there were Dramafever chocolate M&Ms and a Kirin Art School badge. I bet Dramafever fans who didn’t get to go to the meetup would be jealous. 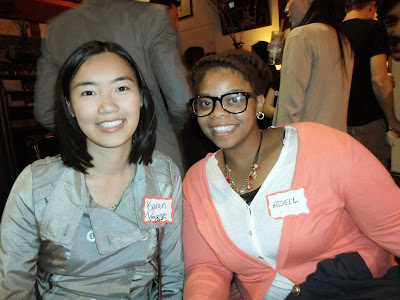 I am amazed that a good amount of attendees are non-Asian who are way more knowledgable than my husband, who is Korean and perhaps even I. Not only do Dramafever addicts watch the shows on Dramafever, but the Dramafever addict I was talking to regularly goes beyond Dramafever to watch other shows. Amazing. I am upset that that I don’t have much time to watch any drama, keep up with the news, and blog at the same time. 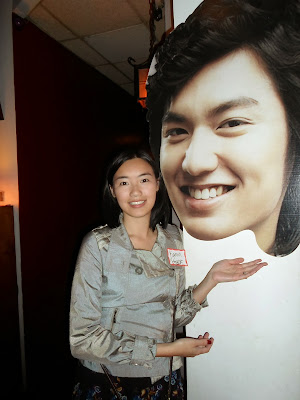 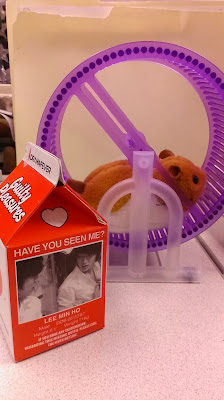 The big celebrity of the night, in my opinion, is the awesome Youtube star, Mister Popo from the channel MisterPopoTV. Mister Popo reviews Kpop, dramas, and more. He also makes Youtube reviews dramas on Dramafever. I honestly want Mister Popo to bust a move because I want to see Mister Popo dance live.  Mister Popo interviewed me along with other Dramafever fans so maybe you’ll catch us on his Youtube channel. When Mister Popo posed next to the giant Lee Min Ho head cutout, I thought he was a huge celebrity because everybody was snapping pictures and video as if they were the mild and calm version of the paparazzi. I have a huge regret that I did not take a picture of Mister Popo himself. I thought my husband had, but I fired him from his photographer job after I found out that he didn’t take a single picture of the lovable, Mister Popo.

I chatted briefly with Dramafever writer and staff member, Carlos Espana,  who is our Dramafever expert in Spanish entertainment. I told him that I read his reviews and he seemed flattered. Yes, I do read almost all the news articles on Dramafever. It’s nice to see a face to the name. Carlos is a very nice person. Dramafever friends asked him if there were any job opportunities and Carlos kindly asked us to check out the careers section of the Dramafever website. Yes, a job at Dramafever: it’s not just a job, but a dream job at Dramafever. I can only dream. I hope to have a great relationship with Dramafever as a writer. In fact, I’ll have to update my About page. If you came to my website because of Dramafever, I thank you for coming and I hope you’ll come back to check out more of my posts. During our chat with Carlos, I think Dan Acton, social media manager and writer at DramaFever, walked past us, interjected, and was gone again. Ah, I didn’t get a chance to meet him either. I wrote him and kept him in copy of a few emails in the past.

A big disappointment of the night was the fact that the food didn’t come out. After tasting the tail-end of a quesadilla, food was sparse throughout the night. Every time something came out, it was gone almost instantaneously. We have some hungry Dramafever fans out there. 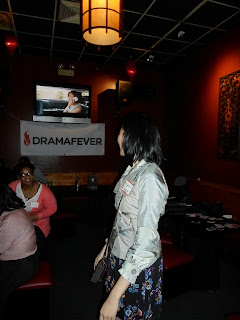 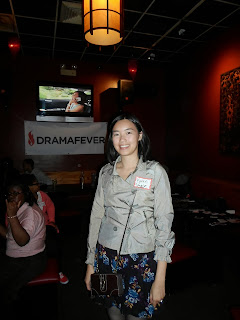 At about 8:00PM, a forth of the crowd had left and there were opportunities to enjoy the film screening room and even grab a seat or have some room to stretch and breathe. At that point, my husband showed up, but food didn’t come out until about 8:40PM, just as the party is winding down. I did a lot of talking during this event, but the restaurant staff didn’t come around often to ask what we would like to drink. I had one tiny glass of water and that glass of water somehow sustained me throughout the night of chatter. Despite some regrets throughout the night, I had a good and fun time. So, if you read this far and you live in or near the NYC area, you would probably be interested in Dramafever’s next, free event. It was announced at the Dramafever party last night and they probably opened the invitation to the public by now so head on over and RSVP right now!

I know that I didn’t mention the event yet, but I want you to RSVP already. That is because they are only extending this invitation to a limited number of people. 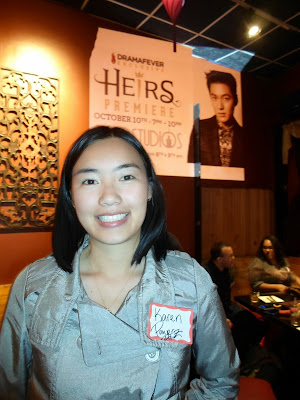 There will be prizes. There will be giveaways. You will get to watch the first episode live with a sea of drama fans. You must be 21 and over though since this party involves alcohol and there is an open bar. 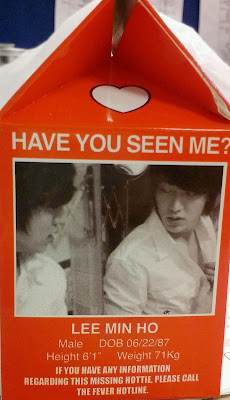 Sure, Lee Min Ho will be on the big screen, but so will Park Shin Hye and the rest of the handsome and beautiful cast.

Dramafever fans who went to the party last night get a three-hour window time to reserve their tickets first. I got mine already.

Special Guest at the Dramafever Screening and Meetup on September 18th, 2013 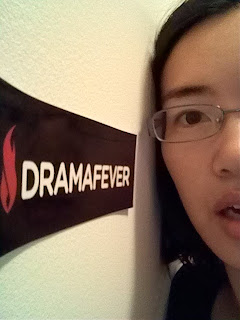 Wehaiyo! readers, I have great news. Dramafever invited me to be a VIP guest at their Drama Screening / Fan Meetup night on September 18th, 2013 at the Apple Restaurant & Bombar restaurant in Manhattan, New York. This is a great opportunity for my readers to see a drama on the big screen, party, and meet me and other drama fans. This invitation is extended to you and if you're in the New York area, please come to this event and RSVP! 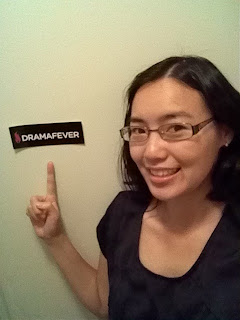 I am grateful for the invitation. Wow, I feel like I'm somebody important in the entertainment circle. A big thanks to Dramafever for the invite and if you can make it, I'll see you there! 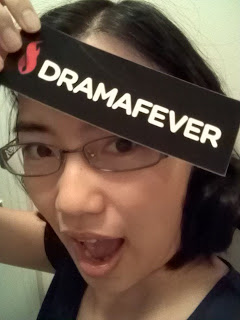 
Please RSVP here, and I look forward to seeing you!
Posted by Karen at 12:15 AM 2 comments: