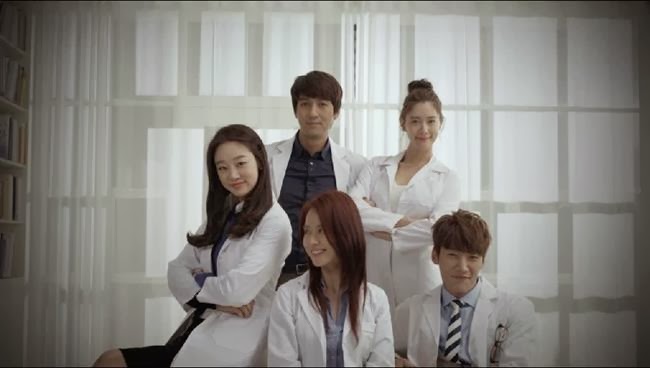 Welcome to the Emergency Couple review with Zombie Mamma, Tanya, and Karen. My name is Karen and for the next ten weeks, my partners and I will be sharing our thoughts on the newest episodes of Emergency Couple. Our thoughts will be simultaneously and exclusively posted on each of our blogs: Zombie Mamma, Hallyu Know?, and of course, this blog, my very own, Wehaiyo! You can find our latest updates on either of these blogs. All three of us are Dramafever Drama club reviewers for the Dramafever website, but decided that we would review this drama independently. 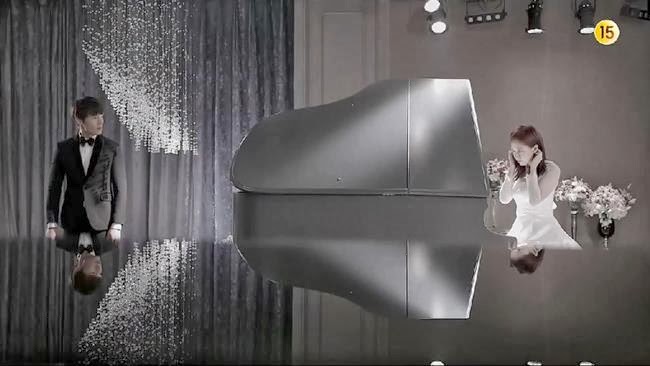 What I am anticipating in the Emergency Couple drama is the chemistry between actor Choi Jin Hyuk, who plays Oh Chang Min and Song Ji Hyo, who plays Oh Jin Hee. When I first heard of the story line for Emergency Couple, it sounded very similar to the story line of the 2011 SBS drama, Paradise Ranch. The two main characters of Paradise Ranch are played by Shim Chang Min, who is most famous for being one half of the TVXQ band and actress Lee Yeon Hee. Their characters married young against their parents wishes, but divorced soon after. Years later, they meet again and fall back in love by the end of the drama. Paradise Ranch was the first full drama I watched on the Dramafever website, but the story line left me so disappointmented and worse, I felt that there wasn't enough chemistry between Chang Min and Lee Yeon Hee. I sincerely hope that Emergency Couple does not fall into this trap. I can deal with a bad story line, but I don't think I can handle another chemistry-lacking couple. 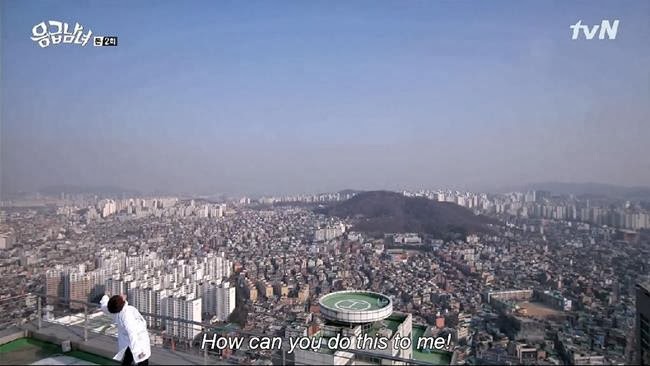 Emergency Couple is the third Korean medical drama I am watching. I have watched the 2007-2008 MBC drama, New Heart, which focuses heavily on the medical part and I have watched the 2013 KBS2 drama, Good Doctor, which has an equal dose of medical and love in the drama. By the way, if you haven't already, I have reviewed all episodes of Good Doctor for Dramafever so feel free to browse through those reviews as well. So far, Emergency Couple seems to be the type of drama that focuses more on love than the medical part. We don't get any political bickering at the hospital as seen in Good Doctor and there is no hint of any staff member who has familial ties to any hospital administration executive as seen in New Heart. 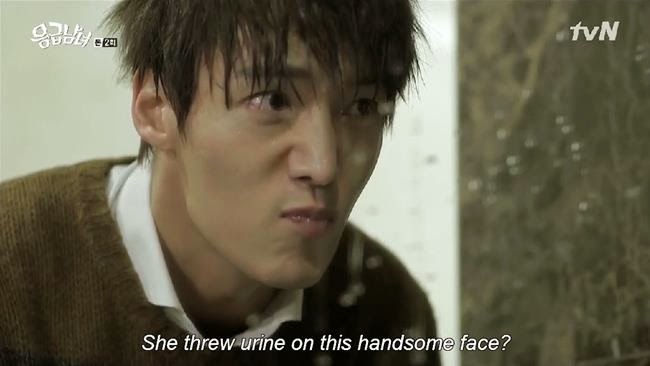 Still, with a third medical drama under my belt, I should be more familiar about how a hospital works, but I don't. I am still very surprised at what an intern life was about. How are interns different from resident doctors? I notice that all interns go to work and leave at the same time. I wonder if the residents take over after the interns go home. Why didn't they go home in shifts like residents do? I understand the interns of team four are assigned to the emergency room for three months, but what are the other departments? I would have liked to know the name of the other departments. I was also extremely surprised when Oh Jin Hee poured a bag of a patient's urine on top of Oh Chang Min's head, exposing him to contamination. I work in a medical-related field so I know that this is definitely a very dangerous thing to do. Who knows if the patient had any kind of infection and the urine actually got into Chang Min's eyes. He would need to go to an eye washing station and report the incident to his supervisor immediately as well as get medical treatment as needed. Jin Hee would have lost her job immediately as she did it on purpose and Chang Min would have to deal with the medical consequences. This is never something to ever joke around with because everyone has a right to be safe at the workplace. Chang Min could not simply go to the bathroom and "wash it off." I am very bothered by that scene as it was a reckless move by interns who should know better. 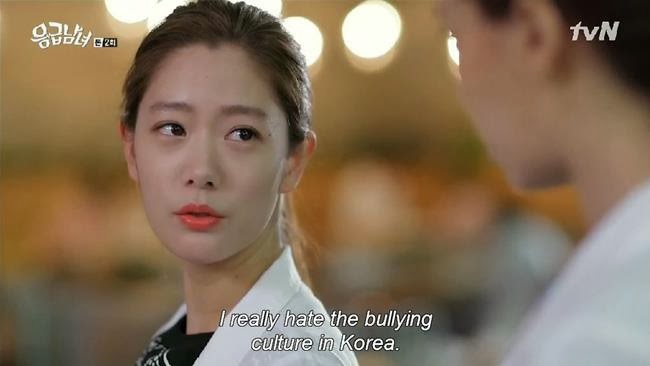 On a related note, I am disappointed that, like the plot of Good Doctor, there is bullying going on in this drama as well. Jin Hee's first day was not only tough because of her mistakes from the previous night, but because all her team members wanted her to quit the hospital because she looked old and unreliable. I have low tolerance for people who judge other people without spending the time to understand the other person. Even the chief, Gook Chun Soo (Lee Pil Mo), tried to fire Jin Hee on the first day without giving her a chance to work. On that note, I felt sad for Jin Hee, especially after she removed her medical diplomas and placed them in her desk drawer instead. What a way to knock someone down. On the other hand, why couldn't she tell Chief Gook the reason why she wanted to be a doctor? That's really suspicious. In a way, I am not sure if she should quit or not quit because of that hesitation. 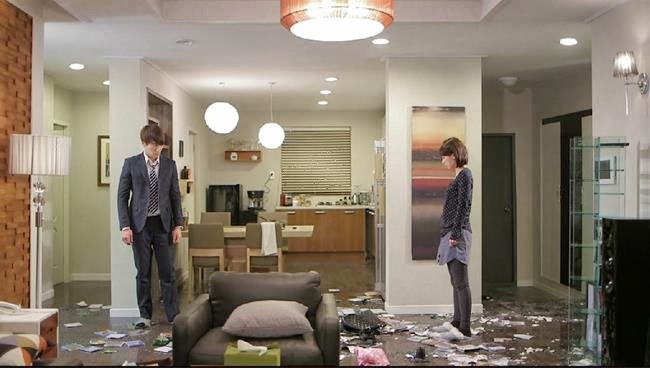 So far, I cannot take sides on this love drama war. Chang Min and Jin Hee equally annoyed me and I don't see a reason to take either side. Jin Hee seems to be such a weak character who is physically and emotionally influenced easily. Chang Min's words are so poisonous and his character is very selfish. As a married woman, I found their famous fight scene so dramatic. No matter how angry I am, I would not take my anger out on such expensive items. I guess they didn't show Chang Min and Jin Hee hitting each other because otherwise, the audience would be too shocked and uncomfortable with domestic violence. From what I see, both sides have their faults and I wonder how they will fall back in love within one year at the hospital. I expected Jin Hee to be more competent as an intern since she obviously worked hard to get where she is, but she messed up a simple thing like a blood draw, making me lose some of my faith in her abilities. 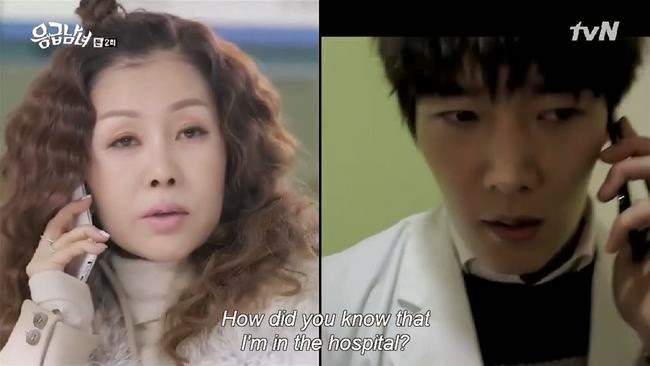 Those suffering from an Heirs drama withdrawal will experience a bit of deja vu because actress Park Joon Geum is playing Choi Jin Hyuk's mother again, only this time she is his real mother and Jin Hyuk seems to be a mama's boy. 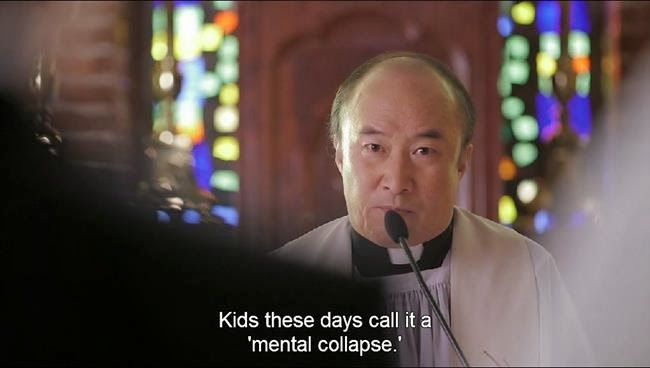 Yoon Joo Sang, who I will always affectionately remember as Shin Sang Duk from the 2013 SBS drama, I Hear Your Voice, makes a cameo appearance as Chang Min and Jin Hee's wedding officiant. Actress Jun Soo Kyung also makes an appearance as a hospital director who flirts with Chang Min. 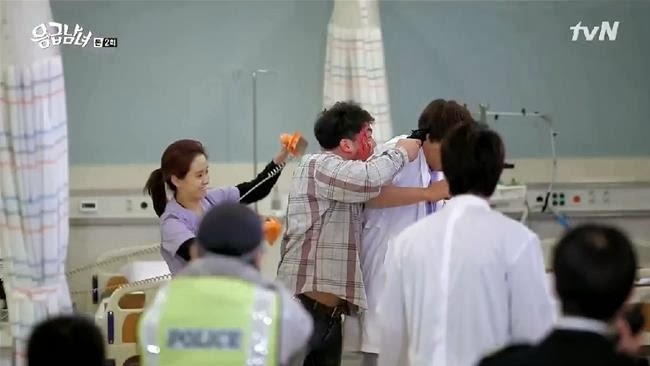 Since we ended with a ridiculous plot line where a suicidal patient had easy access to a security guard patient's gun, Jin Hee shocked the suicidal patient and Chang Min with a defibrillator, which was a bit comical because I don't know if her facial expression at the time meant that she enjoyed it or not. I think, at this point, I can't take the medical part too seriously so I better enjoy the romantic comedy parts and that's exactly what I signed up for.

Look for our upcoming collaborative chat about episodes one and two soon, exclusively on our blogs.