This week has been quiet for me as I barely had time to watch dramas or listen to music. Furthermore, there were not many dramas or songs that caught my eye. I suppose we all have uneventful weeks. 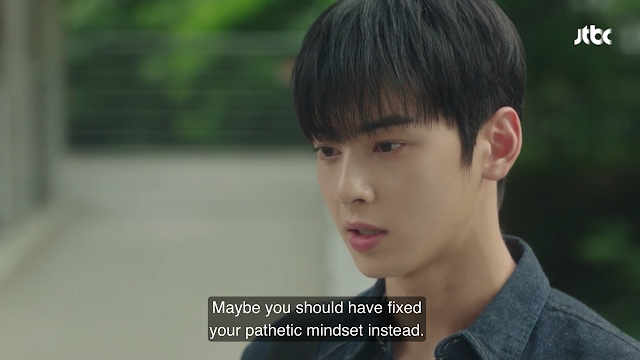 In episodes three and four of My ID is Gangnam Beauty, college student Do Kyung Seok (played by Cha Eun Woo) seems to be very observant of Gangnam beauty, Kang Mirae (Im Soo Hyang) and the other popular girl in their class, Hyun Soo-A (Jo Woo-ri).

When Kyung Seok frankly told Mirae about what he thinks about her grading other people's faces, Mirae, offended, was taken aback and told him to mind his own business. I was internally cheering because somebody had to say it, though I would not have been as blunt as Kyung Seok. However, Mirae soon realizes how superficial she is by rating the faces of other female classmates rather than judging them by their personalities and actions. I am glad that Mirae is maturing little by little.

Meanwhile, Kyung Seok is also seeing through Soo-A as she tries to harm Mirae's popularity at school by connecting plastic surgery with Mirae and purposely getting hurt by a fallen flask in science class. Kyung Seok wasted no time to expose Soo-A for having bad intentions. I like smart leading men. I find his personality more refreshing to watch than him being deceived by women until he realizes the truth at the end.

On another note, I am glad that bully Kim Chan Woo (Oh Hee Joon) was put in his place after his classmate, Yeon Woo Young, played by the handsome Kwak Dong Yeon, gave him an extremely strong warning that he would put his life on the line to ruin Chan Woo's career if Chan Woo does not shape up and stop bullying the underclassmen.

I seem to be replaying the episodes 9-12 of Love In Trouble (Suspicious Partner) over and over again. Whenever I have nothing to do, I put this drama on and see what happens. I do like watching this drama and I think the characters are cute, but I am not in love with it.

I was excited about the potential bromance between No Ji Wook played by Ji Chang Wook and Ji Eun Hyuk played by Choi Tae Joon. It was them against 30 school teens in a fight at the park. I want their broken relationship that was torn over their friend and ex-girlfriend, Cha Yoo Jung (Nara), to mend. I like Eun Hyuk's character the best because he hides his pain so well that it is almost a skill.


Watch it on: Viki

It's time to start a new drama! I have been waiting to watch Your House Helper simply because Ha Seok Jin is in it. He seems to have a recurring role as a man who is meticulous and clean like his role in Let's Drink (Drinking Solo).

After watching episode one, we are introduced to two main women who have interesting lives and messy homes: Im Da Young played by Bona, an advertising intern and Yoon Sang-A (played by Go Won-Hee), a jewelry designer.

I think their stories are interesting so far. Da Young is stuck as a helpless intern who works very hard, but is barely recognized by her superiors and Sang-A, who seems to be struggling in the jewelry design world and an absent boyfriend (On the picture frame, he looks like actor Kim Sun Ho?)

We also have other characters, which I am not too familiar with yet: Kang Hye-joo (Jeon Soo Jin) and Han So-Mi (Seo Eun Ah), a timid nail shop owner. Furthermore, the three women, So Mi, Da Young, and Sang-A are known as OnDol Three Musketeers, but have not seen each other in a long time.

I cannot wait to watch more episodes. Each episode is 30 minutes long and can be easily watched in one sitting.

I have not really found too much to talk about in music. Here are some songs that are easy to listen to in my quiet realm.

I have not introduced Hong Kong pop music, which is my other favorite type of music, on the Wehaiyo Drive before. I think I might have been channeling my grandmother when I thought of Leon Lai, one of the original, legendary, four heavenly kings of Hong Kong pop. My grandmother is a big fan of Leon and calls him her adopted son. I should translate this song one day on this blog.

This song is called "Perhaps, Not Necessarily, But" to describe loving one person. The singer thinks there is a possibility of having a million women who suit him in this world, but in the end, it is this one woman who is a part of his world.

This song is from the Are You Human Too soundtrack. I have not seen this drama yet, but it seems that I should watch it. I will warn Wehaiyo Driver readers that I am not a fan of watching humans in love with a non-human, which is probably why I delayed watching this drama. However, I will put this on my list for next week's Wehaiyo Drive.

The song is so relaxing to listen to since there seems to be a dull feel to it. Seo Kang Joon's voice blends into the music.


I am including another Hong Kong artist in here. I suppose I was randomly browsing and came across one of my favorite songs. Julian Cheng is another great singer. The song is a theme song to the Hong Kong drama, Return of the Cuckoo with my favorite Hong Kong actress, Charmaine Sheh. The title of the song does not actually mean, "Wishing You Well," but wishing Zok Guan, the main female character of the drama, well.

Listening to this song makes me want to watch the drama right now. I think I have never seen this drama, but the song was popular, so I loved listening to the song when I was younger.

What is most notable in the meloncholy lyrics is that the singer rather not hug and grow old with this woman he loves, but rather keep this woman in his heart. Even if they meet by accident, the singer thinks the other guy is better suited for the woman than the singer. The singer only hopes to stop from afar to wish the woman, Zok Guan, well.


I hope this week's post is not that lackluster. I continually strive to provide you better posts every week.

Enjoy reading Wehaiyo! posts? Please subscribe to our blog to get notified of new posts. 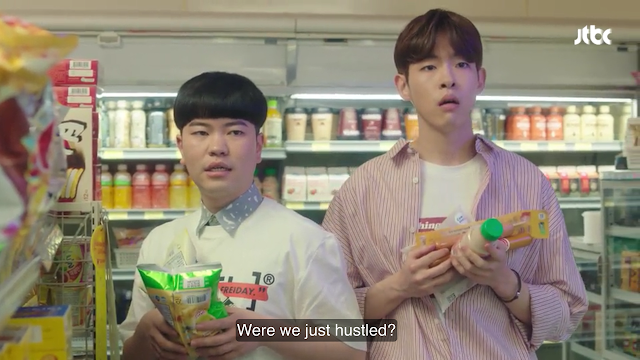