Dramafever had their second major event at 320 Studios in New York City. I'm glad that I was able to grab two tickets and Aileen from Dramafever invited me as well. This time, the Dramafever event was much more organized and bigger than the last. The Heirs premiere was announced a couple weeks prior to those who attended the first Dramafever meetup and then announced on the Dramafever News section of their website three hours later. Attendees must RSVP and be at least 18 years old to attend the event since there will be alcohol, but about three hours later after the event invitation was released to the public, a waiting list formed. My Dramafever friend from the last Dramafever meetup wasn't able to get tickets. 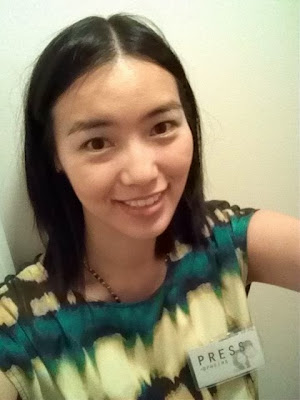 After I came in, I was given a "PRESS" pass by one of the Dramafever greeters. Let's talk about my outfit for a minute. I wanted to dress up, but in a way that matches Dramafever. I saw this dress at Target the week prior and I knew I had to wear it for the Heirs Dramafever Premiere. (Aileen even thought my dress was made out of silk, but sheepishly, I had to tell her it wasn't.) I didn't want to be too flashy though so I kept my make-up to a minimal and paired it with an awesome black celebrity jacket and black boots. I was afraid it would be a cold day and rainy so I brought my umbrella as well.

The first person I wanted to find was Aileen and I was told by the Dramafever greeter that Aileen was wearing a white dress, which gave me an image of a superstar in my mind. I walked around looking for Aileen, but I had no luck finding her. 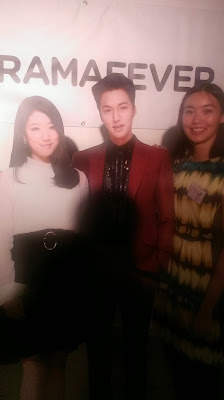 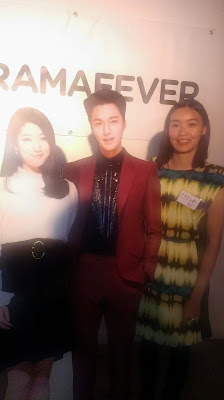 
There were some light appetizers and a bar where guests helped themselves to some food and drinks. A guest I met at the party (sorry, I'm terrible at remembering names) told me that the bartender didn't even take tips. I don't drink beer so I ordered a soda and tried to find a seat in the crowd. I made sure to sit in a seat with a free Heirs poster on it. Overall, I'd say there were at least 150 people at this event. I noticed that I sat two rows behind Mister Popo who is also a vlogger for Dramafever. I don't know why I am such a fan of him or I feel like I know him. Yes, we met at the last party, so technically, I do know him-- a little! Unknown to me, Stephanie from Crazy For Kdrama was sitting two rows behind me.

I made some small talk with a Dramafever fan who sat in the row behind me and we had a short conversation until the event officially started. I still don't know how to answer questions like, "What's your favorite drama?" and "Who is your bias or favorite actor?" I simply don't have a favorite. 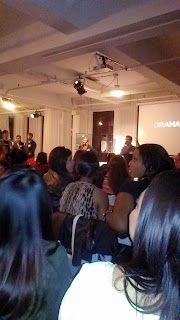 After David from Dramafever greeted the crowd, Dan from Dramafever started off the event by announcing that Dramafever will be giving away some prizes: T-shirts, bags, and a Google Chromecast. Coco (Kdramafighting) asked some trivia questions and the first guest to raise his or her hand who can answer it correctly will receive a prize. Aileen was in charge of handing out all the prizes. Since we are all Dramafever fans, the moments of excitement were pretty intense as fans went wild to try to answer the questions. I didn't bother answer them since I feel like the event should be for fans and not for the "press." I did drool over the Google Chomecast though. I urged my husband to answer them, but he was as clueless as ever when trying to answer these K-drama questions.


We had another surprise before Heirs started. Lee Min Ho and Park Shin Hye made a surprise video message to Dramafever fans. I didn't get my camera out in time, but I'm sure I captured most of the message. 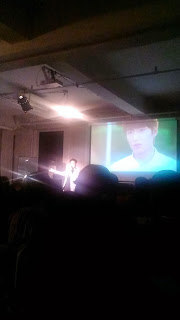 Finally, it was time to watch episode one of Heirs, exclusively on DramaFever.
Usually, I watch my dramas on my laptop with or without my husband, but watching a drama with a room full of people is such a different dynamic. I hear the crowd cheer when Lee Min Ho, Park Shin Hye, Kim Woo Bin, and Kang Min Hyuk was on the screen. Whenever that California surfer friend showed up on screen, the crowd laughed since that actor's acting was so exaggerated. We all laughed together when there were funny scenes. The major scene at the end of episode one where Lee Min Ho and Park Shin Hye look at each other gave the audience so much tension that there were hoots and screams in the crowd.

We then had a fifteen minute intermission because-- there's more!

It was during this intermission that I finally met up with Aileen, who promptly introduced me to Kdramafighting (Coco) and Stephanie from Crazy For Kdrama. I have been looking for Stephanie as well since I knew she was going to be at the party. Unfortunately, all the pictures we took together were mostly on other people's phones or cameras so I've been hoping to see whether other people have posted it on the internet so I can keep a copy. I don't even remember who took pictures of us. We even took pictures with the Lee Min Ho and Park Shin Hye cut-outs and with so many flashes aimed toward us, I felt like a celebrity. If you do have pictures, please send me a copy!

It was probably during this time that a Dramafever attendee recognized me, but didn't want to rudely interupt me in conversation with other people. I am flattered that somebody would recognize me outside of the internet. I hope to meet this person again so we can finally chat.

I gave away some Wehaiyo! business cards and I was happy about that. I honestly wanted to meet more people. 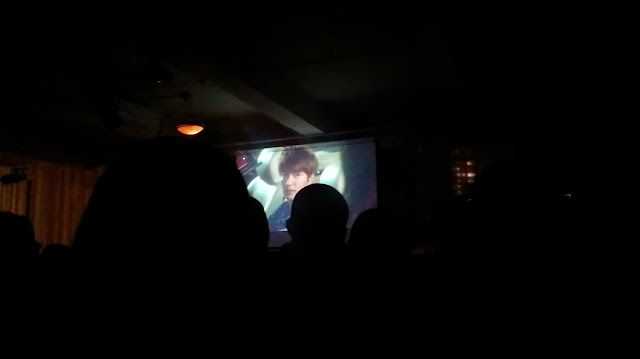 As the intermission ended, it was time for the second half of the party. First, Dramafever gave away another Google Chromecast. Afterwards, Dan from Dramafever announced that the next surprise is that we will watch a preview of episode two! The lights were turned off again as the audience eagerly sat still for episode two.

After getting focused into watching episode two, the drama ended abruptly after Lee Min Ho, who plays Kim Tan in Heirs, opened the door to the guest room of his house where Park Shin Hye, who plays Cha Eun Sang, was staying. I felt myself going crazy with the desire to finish the episode.

Most attendees got up and left the party, but Stephanie and I stayed behind. Aileen thanked us for coming and we hung out for a while more. The ones who stayed were mostly Dramafever staff. I honestly never met the Dramafever staff up close so I felt happy to see the people behind the scenes. We started taking pictures of them and I was asked by a Dramafever staff member to take a picture of them as well. Unfortunately, to my dismay, there was something wrong with the flash in the professional camera, so I don't think the picture came out well. Anyway, I have a picture of my own from my phone camera. Unfortunately, Aileen was suddenly camera shy.

When I see how happy the staff member are, I started fantasizing how great it would be to be one of them. I should definitely apply to see if I can join their team.

I spent the rest of the night chatting away with Stephanie. She's such a cool blogger and she's the first blogger I've ever chatted with in person besides Coco. We have to set up a NY Kdrama club to continue our chat because the next thing we know, the party ended. Time flies when we're passionate about something. 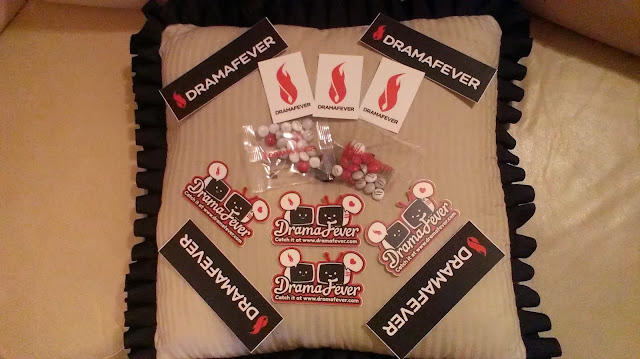 By the time I got home, it was probably after 12:00 A.M. I laid out all the cool stuff I brought home from Dramafever. I took a lot of stickers and chocolates. I wonder if I should give these away. 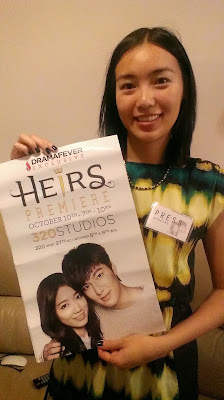 My Heirs poster was a bit creased in transit, but I'm still happy. If it wasn't so creased, I would have given another one away. 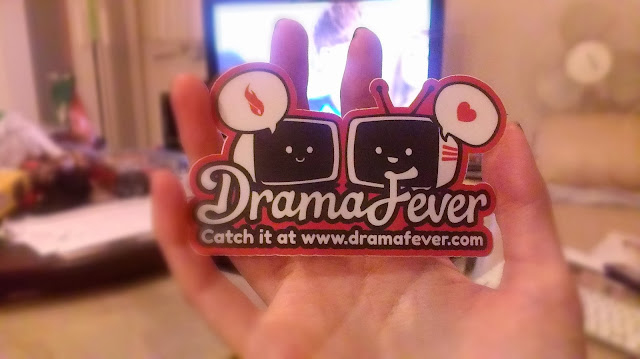 My husband and I couldn't handle the suspense, so we tuned into DramaFever and watched episode two. During this moment, I started thinking of ways to promote Dramafever. Above is one such picture.

I had so much fun at the event that I didn't want to leave. I wish I could stop time and continue living the moment. I was so naturally high by the end of the night.

Unfortunately, it might be a while before Dramafever organizes another party event for K-drama fans. Aileen says that it costs money to buy food, drinks, and rent a space for an event. Still, I hope to attend another Dramafever event and meet even more drama enthusiasts.

For more Dramafever Heirs Premiere thoughts, please read Stephanie's review on her blog, Crazy for Kdrama where you'll see some goofy pictures of me.