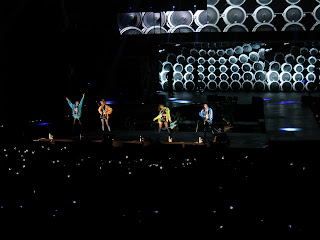 Yesterday, I participated in a 2NE1 flashmob. We had barely two weeks to learn the choreography, but that's okay. The moves were simplistic enough and I managed to dance better than the first flashmob I attended back in Oct 2011.

Basically, I taught myself the moves. Anyway, I'm so glad it turned out well. What didn't turn out well was when I showed up at 3PM for the rehearsal and there was only a handful of people there! Our leader and the majority of the dancers came late. The actual flashmob didn't start until 5PM at the Prudential Center.

What is also very odd is that I've never really toured or walked around the Newark area in New Jersey before. I didn't even make it two blocks when so many beggers came to beg me for money. Their approach is more rude and demanding than if I were in Manhattan. Another thing I notice is that a lot of Newark people like to talk to themselves out loud and have no regard for crossing the street. Drivers also do not hesitate plowing through traffic even if a pedestrian is very close to the curb. As I walk through the streets, everybody knew that I was going to the 2NE1 concert later that night because I think it is because of my Asian face. I don't think they are used to seeing so many Asian people.

If you haven't heard of 2NE1 before, it's time to learn about them now. 2NE1 is a hip-hop style Korean group who is making a bold step in holding a world tour. If you think Girls Generation is a popular group, 2NE1 is just as popular. I first heard their song, "I Don't Care" back in 2009 and I was hooked. Buying a ticket to their concert is worth the money because they have so many good songs! If I wasn't holding a camera, I'd be partying along with all the other people who were frenzied at the concert. 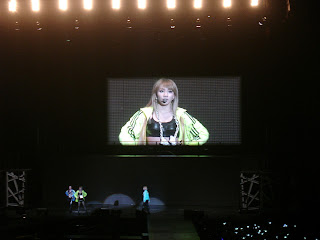 We have CL, who is sort of the leader of the group. CL and I have a connection and I don't mean a personal connection, but more like a fate-like connection. We were born on the same day (Feb 26th). I love CL the most out of all 2NE1 members because she is an excellent singer and rapper. She is so good at what she does that there is no doubt in my mind that she could also hit it big as a soloist. CL has attitude on stage and she really brings all her energy to her performance. I saw that on wikipedia, CL lived in France when she was younger, but I still have no idea why her English is so naturally good! I can't hear any accent at all. She claims to be the shy, quiet type in person, but it's really hard to believe when she's such an extrovert on stage. She dominates the stages and it's pretty easy to see or think why she is the leader. Though, according to Yang Hyun Suk, founder of 2NE1's entertainment agency, YG Entertainment, CL was rejected many times in auditions. Eventually, she was accepted into YG Entertainment only because she was persistent in sending new audition tapes to show that she too can improve her skills within time. It was the same with her groupmate, Bom. 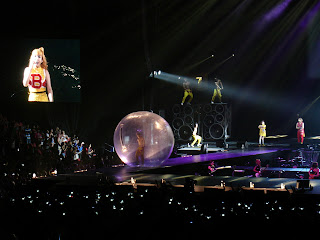 Sorry, my picture of Bom isn't that good. I missed the chance to really capture her doll-like face. Bom seems like she never ages. She is the oldest of the group, yet she is the one with the baby face. Sure, she wears really heavy makeup and dresses in skirts most of the time, but Bom will always be a doll. Besides CL, Bom has the powerhouse vocals of the group. There's a good chance Bom will sing the chorus in a 2NE1 song. Bom has a beautifully mature voice and she has the vocal power for it. That is why when Bom released a single last year, she achieved all-kill, meaning the top number one ranking spot on every single Korean song-ranking chart. Like CL, Bom was rejected many times at YG entertainment, but she eventually made it with her persistence and endless home audition videos. Where would 2NE1 be without Bom? 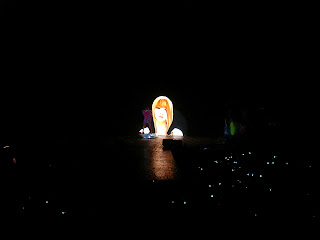 To me, Minzy is different version of CL. Minzy, the youngest of the group, has deeper alto vocals which is almost as strong as CL in rap and vocals. I like the way Minzy also sings with the hip-hop attitude. What is also unique about Minzy is that she is also a really vigorous dancer, but she claimed through an interview that she wasn't always that way. Minzy admitted that when she first started training, she knew nothing about dancing and had to train herself. Well, look at her now. She can gyrate. She can do splits with no problem. Minzy is truly an inspiration. 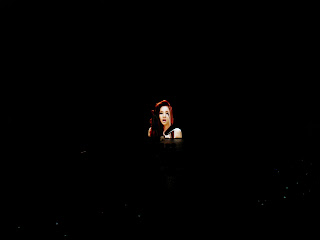 Lastly, we have Sandara to complete the group. Her precious looks and vocals seem out of place with the other power singers, but surprisingly, her opposite talents prove to be very compatible at times. Sandara is the one who looks the tiniest with a mouse-like voice. I can't imagine her doing any major climatic solo parts with 2NE1, but when she sings with a auto-tuned voice accompaniment, it sounds fierce just like how 2NE1 should be. Some consider her the most pretty and the most popular of the group. She can be the most feminine looking of the group and will look pretty no matter what she wears or whatever hairstyle she puts on. Speaking of hairstyles, Sandara rose to fame with her pineapple-like hairstyle, which has become one of her signature looks because of how outrageous it looks. I like how she constantly pushes the boundaries of conventional fashion. When she was younger, Sandara's family moved to the Philappines so she is able to speak Tagalog fluently. Sandara also has a brother in the Korean music industry as well. You may know him as Thunder from the popular Korean group, MBlaq. This brother-sister pair has such a great relationship and is always posing with each other in pictures. Sandara also adores Thunder's cat and even got over her fears for cats.

Now that I have introduced all the members, let's watch the flashmob videos! I could also post my concert videos, but I think the quality of mine isn't that great. Maybe I'll post them at a later time if you want to see them. You can hear some of 2NE1's popular songs in the flashmob:
I Love You
Fire
Please Don't Go
Can't Nobody
I Am the Best
Ugly